Home Events Pictures of Hawick and her People @ Hawick Museum

Pictures of Hawick and her People

Pictures of Hawick and her People 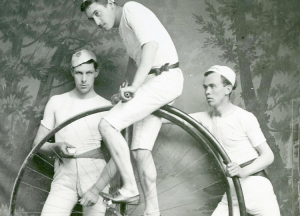 From James Murray, founder of the Oxford English Dictionary, to sportsmen, business people, local Common-Riding principals – also great paintings of the town in the 1800s. 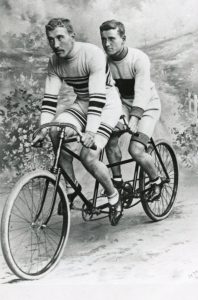 *Photo – 1897 – William Robson of Hawick Cycling Club and his brother George completed a record-breaking ride on a tandem in 2 hours 26 minutes and 18 seconds.

There is also a section on Hawick Cycling Club, Scotland’s oldest cycling club which was founded in 1881. The display holds cups, jerseys and memorabilia.

Looking at the story of Hawick Cycling Club, Scotland’s oldest cycling club which is still going strong! Cups, medals and great photos from the early years to the present day tell a fascinating story.

There is also a section on Ken Laidlaw, the Club’s most successful cyclist who rode for Britain in the 1960 Olympics in Rome.  He was the first Scot to complete the gruelling three-week Tour de France in 1961, coming a creditable 65th.

To mark the Hawick Festival of Cycling, culminating on 11 September when the Tour of Britain Stage 7 starts in the town.

Booking tickets in advance is advisable, click HERE to book your tickets today!